The biggest, grandest and most colorful festival of Davao City is happening on August 19-21, 2011. Locals say it’s an event you truly shouldn’t miss. And it is somethings that I don’t wanna miss…but have to. 😦 It escaped my mind during the sale season of CebuPac and AirPhil for August, and now the ticket prices have skyrocketed way over my budget limit.  Additionally, August 22-26 is a big week for us in the Project so I can’t risk getting stuck in Davao (though it’s actually ok coz I can spend more time with BF) and not being able to return on the 21st.

Anyway, if I can’t go with you, I’ll at least write some posts about Davao and help make the most of your stay! I’ve already written about one of my favorite places, Cake Galerie. It’s for your sweet tooth’s sake, so give in to the craving. Haha. 😀 Anyway, this post is about the Francisco Bangoy International Airport aka Davao International Airport.

This was the first airport I have been in while working for the Project. (Imagine, getting dispatched on a regional-via-flight trip on your second week? Not to mention the first trip just three days after starting to work?! Good deal, eh?!). According to Wikipedia, this airport is named after Francisco Bangoy, the patriarch of a landed nobility (aka as old rich family) after he donated land (see!) for the airport’s operations in the 1940s. END_OF_DOCUMENT_TOKEN_TO_BE_REPLACED 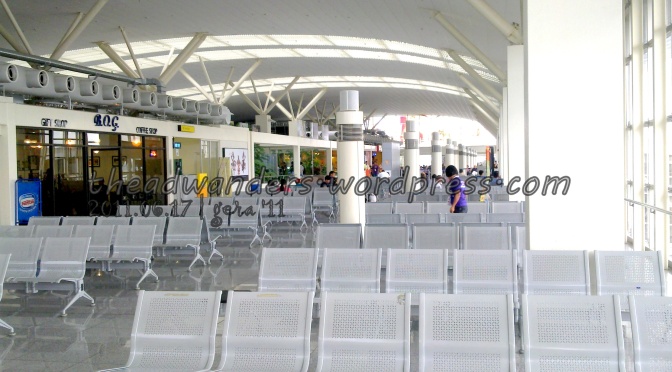 Let’s just say this is the part 2 of my earlier blog on arriving at Iloilo International Airport. As mentioned, we went to Iloilo on the 13th and left for Manila on the 17th. It wasn’t rainy when we went there but it was raining like crazy when we headed back to Manila. As I explained earlier, Iloilo is a Climate Type III area with prolonged rainy season (actually, almost throughout the year!) so don’t forget your umbrellas! END_OF_DOCUMENT_TOKEN_TO_BE_REPLACED

The first time I went to Iloilo was for my work at H&L magazine way back in September 2008. I think this was my first work-related travel (if I would not count the planning in Puerto Galera and the company outing in Subic).

Anyway, we arrived at the airport after a life-threatening stormy cruise at more than 20,000 feet in the clouds. It was so scary that Ms. Elna, the sales manager who made the trip happen, had to open her phone just so she can send a text message to her mom who is with her daughter.

We thought that this only happened to us because we took a Cebu Pacific (Cebu Pac) flight but Doc Michael (the endocrinologist giving the day’s lecture series) said the same thing happened during his Philippine Airlines (PAL) flight. So, it’s really the bad weather. (More on this in another post as this one is supposedly for the airport itself.)

Since it’s only the second time I flew (the first being in HS for the national press conference competition in General Santos), I can barely remember what an airport looks like (except for the NAIA Terminal 3 where we took off from Manila). The Iloilo International Airport, which started operations in June 2007, is by all means a modern-looking one–at least for the Philippine standard. It ranks first on my regional airports ranking, with the Francisco Bangoy International Airport (Davao) in a close second. END_OF_DOCUMENT_TOKEN_TO_BE_REPLACED

All but one of my work trips were flown via Philippine Airlines through the Ninoy Aquino International Airport Terminal 2. The terminal is also referred to as centennial terminal since it’s completion in 1998 coincided with Philippines’ 100th year of independence from Spain (although a marker in the terminal said it was constructed in August 1999). Today, Centennial caters specifically to local and international flights of Philippine Airlines (PAL, the country’s flag carrier) as NAIA Terminal 3 hosted Cebu Pacific in mid-2008.

When I was working for the two-month JICA study, both PAL and CebuPac operated from this crisp-white, wanna-look-modern airport. The check-in counters were usually divided into two sections, one for each airline. Now, PAL mans all the 28 check-in counters and filled it with the blue, white and red line separators. Gone are the yellow polo shirt-wearing staff of CebuPac and more yellow checkered formal-uniformed staff of PAL welcomed passengers.

I have gone through Terminal 2 dozens of times and probably through all of its boarding gates. I have also done my computing in all of its laptop stations at the boarding area and used both of its comfort rooms. I haven’t eaten on all of the food stalls though as some of them looks intimidating (read: expensive).

To give you an idea of what’s inside the boarding area (especially for those who have never flown via PAL) and as I got a little bored waiting for our flight, here are some fast facts about Terminal 2, mostly for the boarding area of domestic flights. END_OF_DOCUMENT_TOKEN_TO_BE_REPLACED

Content are written and photos are taken by The Diarist, unless otherwise stated, and I reserve the right for its use. If you want to use any of the photos for personal and/or commercial purposes, please email me at geralynrigor@gmail.com. I might even send you the full-size originals. Happy wandering! Copyright 2011-2019 | Geralyn Rigor ©The Diarist Wanders