The first time I went to Iloilo was for my work at H&L magazine way back in September 2008. I think this was my first work-related travel (if I would not count the planning in Puerto Galera and the company outing in Subic).

Anyway, we arrived at the airport after a life-threatening stormy cruise at more than 20,000 feet in the clouds. It was so scary that Ms. Elna, the sales manager who made the trip happen, had to open her phone just so she can send a text message to her mom who is with her daughter.

We thought that this only happened to us because we took a Cebu Pacific (Cebu Pac) flight but Doc Michael (the endocrinologist giving the day’s lecture series) said the same thing happened during his Philippine Airlines (PAL) flight. So, it’s really the bad weather. (More on this in another post as this one is supposedly for the airport itself.)

Since it’s only the second time I flew (the first being in HS for the national press conference competition in General Santos), I can barely remember what an airport looks like (except for the NAIA Terminal 3 where we took off from Manila). The Iloilo International Airport, which started operations in June 2007, is by all means a modern-looking one–at least for the Philippine standard. It ranks first on my regional airports ranking, with the Francisco Bangoy International Airport (Davao) in a close second.

After my trip in Iloilo, I didn’t expect to be back there any time soon, or at all. But then, my first project for JICA led me back there in January 2009. Yey! The flight, as far as I remember, was quite comfortable and it’s not necessarily because we took PAL (enough of doubting CebuPac’s safety please!) for this one. It’s really the location (central Philippines) and weather, as you have to take note that Iloilo is classified to have a Type III Climate (Wet and Very Wet seasons). Though this is usually applicable to plant growth, it at least gives you an idea of what to expect: rains and a lot of it almost throughout the year. This was also what we experienced on our previous work trip on June 13-17.

So, back in time and the airport. Upon our arrival, there was one conveyor belt delivering the passenger’s baggage. Though it’s only one, the service is much faster than that of NAIA Terminal 2. There’s also a restroom in the arrival area so you can go for a quick CR run and touch-up. By the time you’re back, the baggages are being unloaded already.

After claiming your baggage (make sure you pick the right one!), you can already proceed to the exit area with just a few steps. If someone is picking you up, good for you as the airport is a bit far from the city center (this is probably the only disadvantage it had from the old Mandurriao Airport that it replaced). There are several taxi operators by the airport, offering both metered and hired (P350?)services. You can also hire a van if you are a group (when it was just me and my boss, it cost us P500 in early 2010?) or take the passenger van that would take you to SM Iloilo (at the city center)  for P50. Sorry but I don’t have any idea about the cheaper jeepney transport.

As far as I can remember, it would take about 30 minutes to get from the airport to the city center. The first 15-20 minutes of which is relatively traffic-free, especially in the early road sections from the airport. Expect heavy traffic though if it has been raining continuously because the city is a flood nightmare on very bad days. On the way, you would pass by the Iloilo City countryside complete with rice plants and some coconut trees. It’s also the agro-industrial area (mostly are animal feeds factory) so expect to catch a hint of mixed corn, milk and something-I-can’t-identify in the air if you’re not on an AC vehicle. Don’t worry, it smells more pleasant than what you’d expect.

Anyway, once you reach the city center, different transport means are available: tricycles, jeeps, taxis (fast fact: in SM, each taxi operator has a specific loading bay), and buses. Iloilo City is huge and there’s a lot to explore. From the museum to the old churches and the delicious food fare (seafoods and La Paz Batchoy is a MUST!), you surely would enjoy your stay, even if you missed the Dinagyang Festival! 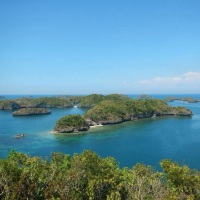