Reblogged is a series of blog posts on my life in India coming from the weblogs I set-up. It’s an attempt to put the stories all in one place! The post The Taj Mahal – Finally! was originally posted on October 15, 2012, a month after I’ve taken the trip on September 9. Another post is connected to this one, which will be posted as a Viahera Vlog. The visit to Agra was a side trip before attending the official meetings of the Volunteer Committee (which I was a part of) at the VSO India office (read: no extra cost charged to VSO) to discuss policies for volunteers and put forth comments, opinions and suggestions from volunteers in India for improvement in programme support and effectiveness of volunteer placement and organisational partnerships.

Before coming to India, I only know a few things about this sub-continent and what stands out among these is the Taj Mahal. I barely know the story about Taj Mahal before I came here, only that it is a must-see monument, one of the seven wonders of the world.

END_OF_DOCUMENT_TOKEN_TO_BE_REPLACED

During the first time I set foot in Malaysia back in 2010, we only had one day and between Melaka, Genting Highlands and the Batu Caves, we decided to play with the clouds. It was only during the month-long Southeast Asia backpacking trip that I made it to Melaka and to the Batu Caves, both thanks to my fried Rajie who took time off her busy schedule to tour me, Lalai and Tetet! 🙂 Anyway, Batu Caves, as the name suggests (in Tagalog, batu, well bato, means stone), is a series of caves and cave temples inside a limestone hill. Batu Caves is a popular tourist spot and Hindu temple site around 13kms north of Kuala Lumpur, the capital city of Malaysia. The area is surrounded by birds feeding on corn kernels the visitors throw around and by a small pond of ducks and koi fish. You’d need to climb up about 8-10 floors worth of stairs, alongside monkeys that can be pretty violent when they see food, to get inside the caves and the temples. Rajie, at the time at least, was not a devout Hindu so we were not sure whether the stories of Kartikeya (the massive golden statue at the foot of the caves to which the cave temples are dedicated to), and his family (daddy = Shiva, mommy = Parvati, brother = Ganapathi) and the peacock he’s riding, were as accurate as the scripts or just made up bedtime stories! It was quite entertaining though. 🙂 After visiting the caves, you might want to relax your legs and knees a bit and stay a while by the small pond, watching the ducks and koi fish glide and swim. Or, you can also pay a visit to Lord Hanuman, the monkey god, farther on the left.

END_OF_DOCUMENT_TOKEN_TO_BE_REPLACED 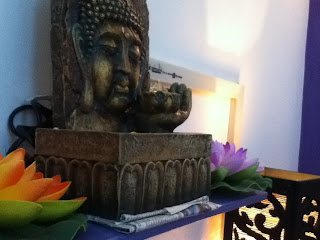