Traveling via public transport during the “sold-out holidays” has always been one of my most dreaded commuting stories. The Monday holiday for the philippines’ May 13 Midterm Elections is no exception! 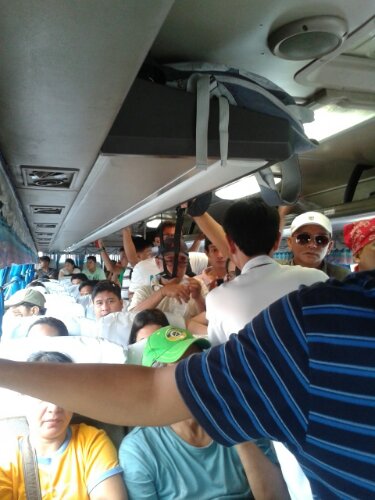 And my current (yes as in I’m still on the bus, thanks to their free WiFi service) sitting-by-the-stairs-right-next-to-the-glass-door position is a perfect example. Grrr.

I didn’t realize that there will be a lot of people who are still hometown-bound to vote and participate in the midterm elections. So, I took my sweet time longing at our Quezon City home before leaving for the bus that will take me to Victoria, my hometown. Yes, I have not changed my residency and I am still a registered voter in Tarlac!

My “seat” situation might not be ideal but that’s the price you pay for being patriotic (ehem!!! Hehe) and exercising your right to vote! Or, if you were lazy to move earlier in the day! Oh well. Either way. I hope Philippines’ 2013 Midterm Election and the new leaders who will be elected are worth the sacrifice and efforts of voters. Sulong, Pilipinas!

Note: The elections in the Philippines are considered sold-out holidays. Touristic travel via public commuter vehicles such as provincial buses will prove to be stressful, both among locals and foreigners. Most bus fares will remain the same though, unlike airfares that peak during sold-out holidays. Otherwise (as in on normal days), bus commuting in the Philippines is generally comfortable (especially AC/deluxe buses), reliable and safe.

Postscript: returning to Manila right after voting (9am) was a breeze–even got so sit from our town to the MRT station. Though there were people who had to stand, it wasn’t as packed as when I went home. It was a different story though for my mom, bro and grandma who had to cut their trips just to make it back due to the huge number of people!