If there was one thing I really hated about the cancellation of my flight to Kota Kinabalu, Malaysia, it would be the full day I was supposed to spend at the Tunku Abdul Rahman Marine Park.

You see, I’m not much of a shopper so not being able to go to the Sunday Market at Gaya Street did not really get me too frustrated about it. But, I am a beach person–not necessarily a swimming one but more of a stare-at-the-horizon-while-doing-nothing kind. Plus I like to go underwater too–if only to snorkel and see the little fishies I only see in aquariums or TV shows. So, when I was planning the trip, it was the only must-do in the list.

In the morning, after I had the free breakfast and chatted with the foreign guests and the Filipina staff (four of them!), I made my way through the not-so-busy streets of KK City Center and walked about, just to observe the place and all.

Before I got to the waterfront area, I chanced upon this local eatery and I remembered that Zuldee recommended to have nasi lemak in the morning. And so I did, even when the toast, jam and fruits breakfast already filled my tummy!

Nasi lemak is basically rice, cucumber and anchovies with shrimp paste wrapped in banana leaves. Nasi means rice and I dunno what lemak means but it’s definitely not the anchovies coz it’s called bilis (it’s dilis in Filipino). Honestly, I didn’t really think it was something special—but maybe it’s just my palate. You should try though; it’s like one of the must-try food whenever you’re in Malaysia. One thing I did enjoy is the canned chrysanthemum tea. It’s the first time I’ve seen, heard and tasted that tea!

Since I’ve had my fill (of food and observing the local people eating, drinking their coffee and tea, and just chatting) I made my way towards the waterfront. I wonder why we can’t make our waterfront areas (like along Roxas Boulevard or even MoA) look as clean as the one in KK. I mean, the place itself is quite simple. But it is clean. Even the tent/stall area (where we had dinner the night before) is clean as well. And so, it’s really nice to just walk around and stare mindlessly into the ocean.

After taking many pictures of the scenery and me through the 10-second timer option, I continued to walk towards the direction of Jesselton Point. It was a leisurely walk, I think. I knew I have quite little time left in the morning as it is but you know, it’s nice to just walk in a slower pace than you’re used to. Plus, the boardwalk area, though not as clean as the “central” waterfront area, is still a good enough place to do some walking.

At the end of the boardwalk (and I think behind one of the malls), you’ll see the Jesselton Point ferry port already. It’s still quite far but at least I now know where I am supposed to go. Hehe :p

Jesselton Point serves as the port for many tourist boats headed for the Tunku Abdul Rahman Marine Park, also called TAR. The Marine Park is composed of three islands–Manukan (most developed), Sapi (best for snorkeling) and and Mamutik (less crowded). I chose to go to Sapi since I really wanted to see some fishies. 🙂

Jesselton also serves as the gateway to and from Labuan and Brunei. I think some areas in Sandakan as well. And maybe, some small residential islands in the area. I went to Counter 8 to get my ticket for the boat, RM 17 for one island (round trip). Snorkel and mask was also rented at RM 10. I also needed to pay terminal fee (did I pay tax too? I forgot.) in another counter. After which, I proceeded to the boat area, passing by shops and food places.

There are shops and stalls on both sides. I think more than just a port, Jesselton also serves something like a gimik area for locals and tourists alike.

After waiting for some more passengers, Rizal, our half-Pinoy half-Malay boatman gave us route information and required everyone to wear the life jackets. I’m glad I listened. Hahaha. Watch the video to know why!

After about 20 minutes of that and a quick stopover to drop off passengers at Manukan Island, we finally arrived at Sapi Island. Seriously, I thought I was gonna be sick!

But of course, for the sake of a good picture, I just smiled and pretended that everything was alright. Hahaha. This photo was taken by the guy in front of me in the video earlier. He said, and I quote, “Oh, you look like a beauty queen!” Sa kanya galing yan ha!

After paying for the entrance fee (or environment conservation fee?) of RM 10, I just took some photos and immediately changed into my swimsuit. Didn’t really wanna go on a two piece but since everyone else does it anyway and no one really cares, what the hell right?!

After just staring and reflecting, I took some more pictures of the beach and the people, doing some timed jump shots as well. The lifeguards actually asked if I wanted their help but I politely said no. Diyahe! I did ask them to look at my things though as I explore the short stretch of beach and go snorkeling.

I liked the sand. It’s powdery and white. It reminded me of the night we did some sort of sand scrubbing along the shallow beach of Aloha in Bohol.

I’m not really good in comparing corals and such but I can say that they are not so colorful. Seemed dead to me but the presence of fish in the area tells me it’s enough to sustain the existing marine life.

There were really a lot of fish in this island. I mean, you don’t even have to go far and there they will be, swimming with you or towards you. There’s was this fish that totally freaked me out because it was looking at me so intently. Paranoid much?! hahaha. But seriously, it really did!

Anyway, I want you to have an underwater (although it’s just a meter deep) adventure yourself so do watch the vid!

At about 12:30, I got myself ready already (the bathroom/change area is soooo not great) and ran to the pick-up point as I need to head back to Jesselton already. As promised, Zuldee was already waiting for me to take me around KK. Yey! 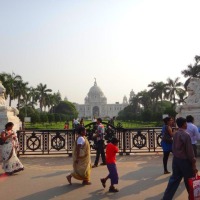 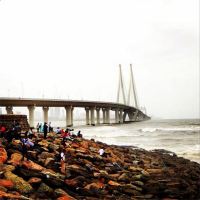